The first thing Ashwin said when we read the ASI signboard at the entrance of the Karla Caves was "Whoa, this is the oldest monument I've EVER been in". Me too*, I realized, in awe! Located just off the Pune-Mumbai highway near Lonavala, these rock-cut Buddhist shrines in the Sahyadri hills were built in two phases: one from the 2nd century BC to the 2nd century AD, and the second from the 5th to 10th centuries AD. Just the idea of being in something so old was goosebumpy (if that's not a real word, it ought to be!).

There are more than fifty groups of rock-cut temples in Western India, many of them in the Sahyadri Hills - this is believed to be because the volcanic rock in these parts is composed of alternating layers of hard and soft rock, making it relatively easier to cut and carve. The rock is also moisture resistant, and provides shelter from the heavy rains the region receives.

Most of the caves at Karla were built during the Hinayana phase of Buddhism, except a few that were built later during the Mahayana phase. The main cave houses India's largest Hinayana Chaitya Gruha or prayer hall. At its entrance, is this huge 15m high pillar:

The entrance to the cave is profusely decorated with carved animal and human symbols depicting different phases from Lord Buddha's life. But He himself is not depicted in a human form anywhere in this cave - this is typical of Buddhist monuments from the Hinayana period. 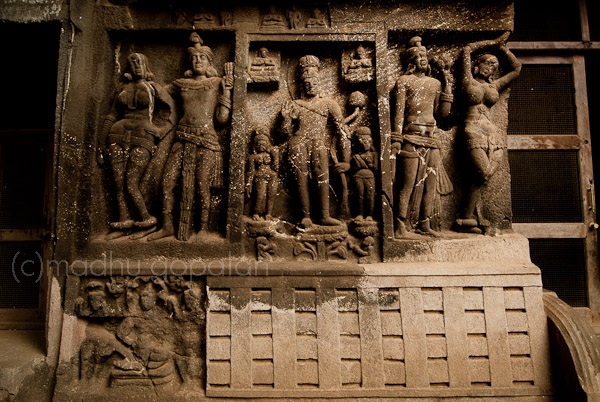 The Chaitya has a series of carved pillars leading to a rather plain stupa in the center. Check out the wooden umbrella arches that have survived more than 2000 years with no signs of decay:
The cave complex also has viharas or dwelling places for monks that were also used to accommodate travelling traders, since the caves are located close to an important ancient trade route.

And finally, this, is the killer view of the hills the monks must have had from the monastery :)
The Karla Caves are very popular with tourists, so the 20 minute climb from the parking area to the caves is full of shops selling snacks, refreshments and souvenirs. There are more rock-cut temples nearby at Bhaja and Bedsa too, but we couldn't fit those into our trip. Which is cool, because it gives us a reason to visit again :)

*(Edited to add: The petroglyphs in the Edakkal caves in Wayanad are now officially the oldest man-made...uh, things...I've seen)